Get ready to be amazed at this super easy bread recipe.  I adore it.  I haven’t bought bread in a year, this is all my family uses for bread.  I can’t get over how easy it is, that’s the only reason that I can make it all the time like I do.  So many people have been asking for this recipe, so I thought it better be posted soon!  Who doesn’t love artisan style bread?  I personally think it’s as good as the bread you can buy at places like Panera Bread.  Even if you’ve never made bread, give this a try, it’s much easier and less time consuming than traditional homemade bread.  Oh and did I mention it only has 4 ingredients?

I took my recipe from a cookbook called Artisan Bread in Five Minutes a Day. It’s also available at the library if you want to check it out before committing to ordering it.  The same chefs also have a cookbook entitled Healthy Bread in Five Minutes a Day, but I recommend perfecting the regular white bread recipe first.  Once you have that down, feel free to adapt the bread and experiment with recipes and different ideas.  I have enjoyed both books and trying out different types of flour in various recipes.  I’ve used whole wheat, white whole wheat, spelt, rye, oat and others.  I like to see what delicious recipes I can come up with and still have a healthy product in the end.

Pour lukewarm water into a large bowl with high sides.  Sprinkle yeast over the water and let it sit a minute or two until the yeast starts “melting”. 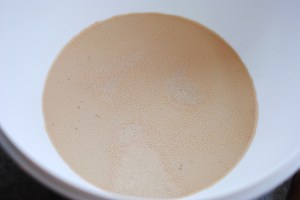 Add the salt and flour 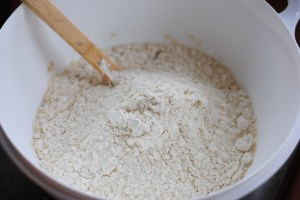 Stir the dough with a wooden spoon, it will soon look like this 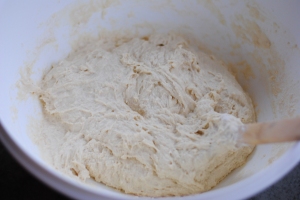 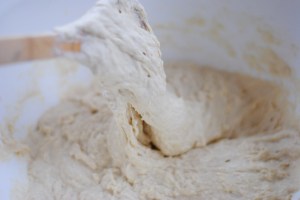 It’s a wetter dough than tradition bread dough.  Cover the bowl with a lid, but make sure it is not airtight.  I move the lid slightly off center so that the gases/air can escape.  Let the dough rise 2 hours or more, and until the dough flattens out on top some. 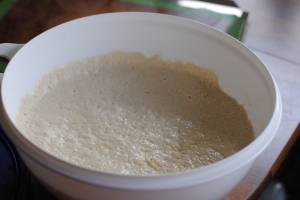 Take your dough out and pull off a hunk of dough the size of the loaf you want to make.  Place it on a lightly floured surface.  I typically get 3 loaves out of a batch of dough. 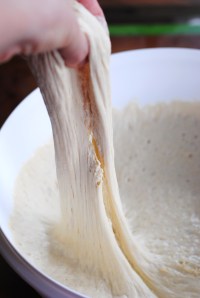 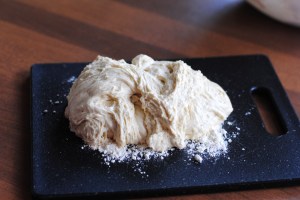 Taking 30 seconds or less, begin to tuck and turn the dough, until your dough looks like this 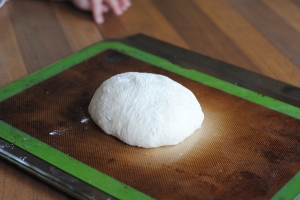 I place my dough directly onto my silicone mat on my baking sheet.  The original recipe recommends a baking stone, but I haven’t found it necessary. (notice the little hand sneaking into the picture)

Let the dough rest for at least 40 minutes.  You can let it rest up to 90 minutes, which gives it a more “open holed” structure on the inside of the loaf.  The dough won’t really rise during this time, it might actually just spread sideways.

After the dough has rested, lightly dust the dough with flour and make 3 or 4 slashes across the top 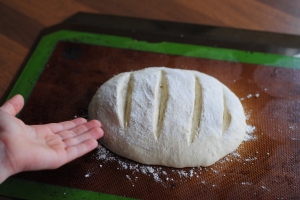 Place in a preheated 450 degree oven for about 28 minutes.  It should have a nice brown color and a crusty outside when the bread is done.  I take mine off the baking sheet to cool. 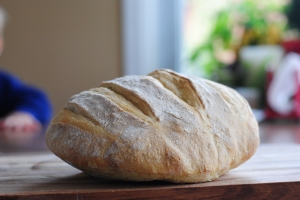 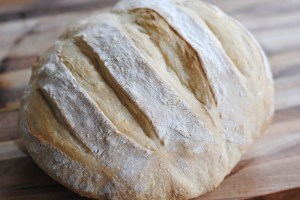 Isn’t it lovely?  Bread like this could possibly rival chocolate for me.

It is also recommended that you don’t slice this bread until it is mostly cool.  I know that is a tall order, it’s so hard not to dig into hot, fresh bread!  I have found that it makes the inside gummy if I slice it too soon.  But you do whatever you need to do. 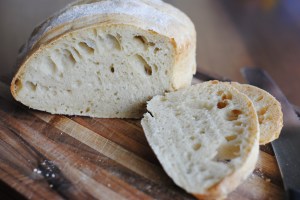 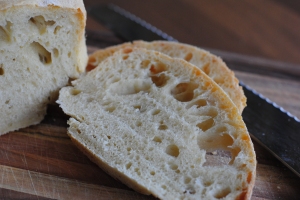 And just for good measure, here are some “chaos” pictures for you…this is what was going on behind the scenes while I was snapping these pictures 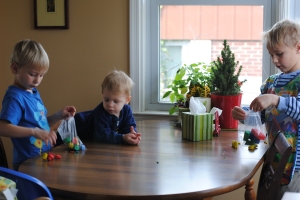 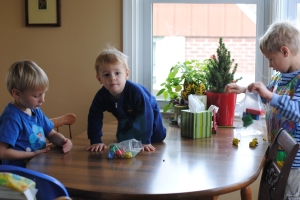 I said this was cooking AMID chaos didn’t I?!

Pour water into a large bowl with tall sides.  Sprinkle yeast onto the water and let sit for a minute. Add salt and then the flour.  Stir with a large spoon until everything is mixed together.

Let the bowl sit in a location away from drafts covered with a lid, but make sure it is not airtight. Let the dough sit for about 2 hours, until the dough has doubled in size and flattened out on the top.  Place in the refrigerator until chilled or until you are ready to bake a loaf.  When ready to make a loaf, grab a portion of the dough from the bowl and place on a lightly floured surface.  Tuck and turn the dough until it is smooth and shaped into a round, slightly flattened ball.  Place on a greased baking sheet, a silicone mat or baking stone.  Let sit for at least 40 minutes and up to 90 minutes.  Lightly flour the dough ball and slash about 4 times with a sharp knife.  Place in a 450 degree oven and bake for about 28 minutes.  Remove from baking sheet and allow to cool before cutting. 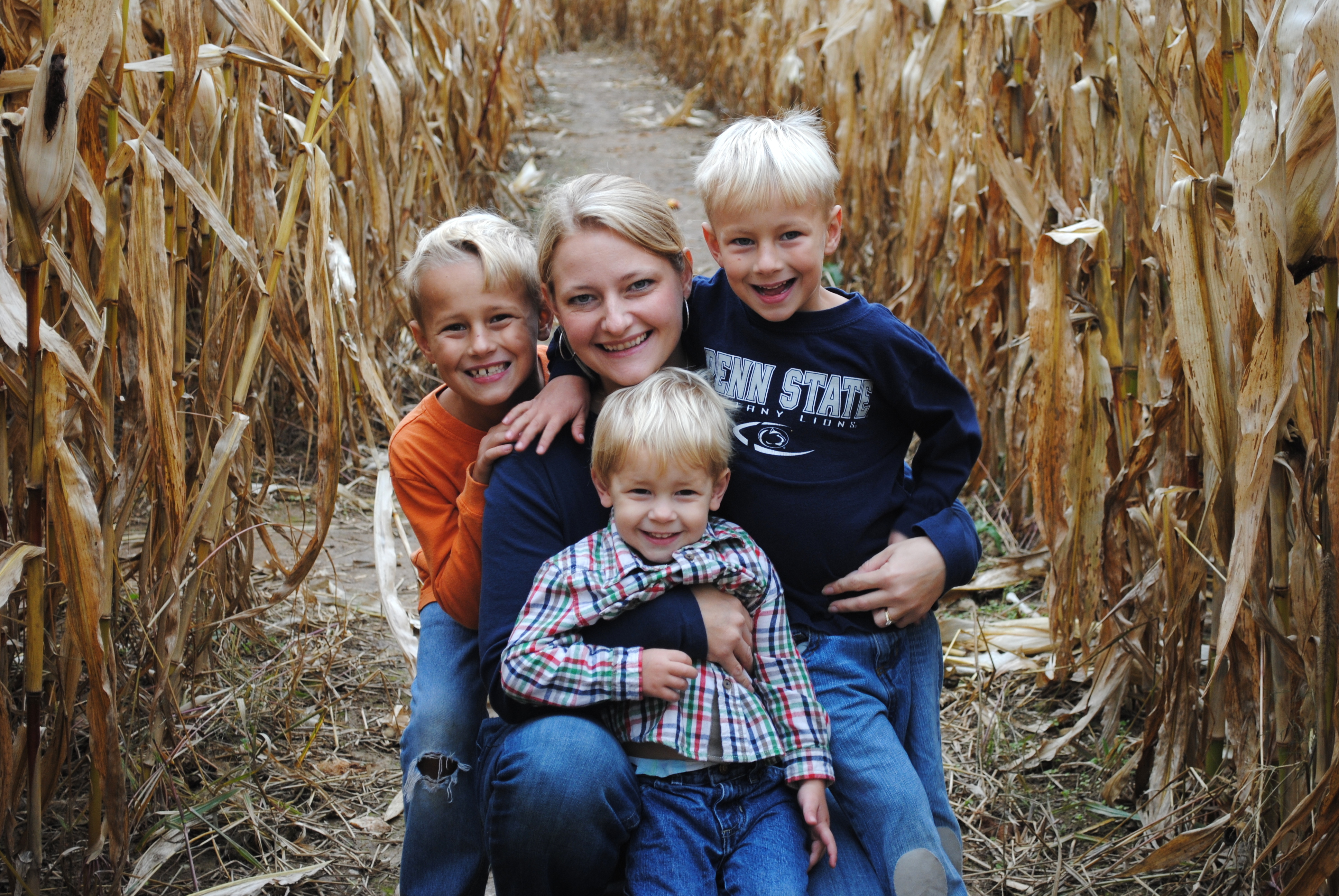