I can’t stop eating these.  They are so GOOD.  They remind me of a cinnamon roll without the work.  My mom and I are always having a discussion about scones.  She doesn’t seem to understand why I like them.  I told her yes, I do like scones.  GOOD scones.  Not those hard, dry scones from Starbucks.  Sorry Starbucks, you make wonderful caramel lattes, but your pastries are sadly lacking.  (This is just my opinion…I’m annoying when it comes to baked goods)  I like scones that are soft, buttery and moist.  They have to have some good flavor too.  I think the key is (and you pie crust makers out there understand this) not to handle the dough too much, and don’t over bake them.  This will be the result…. 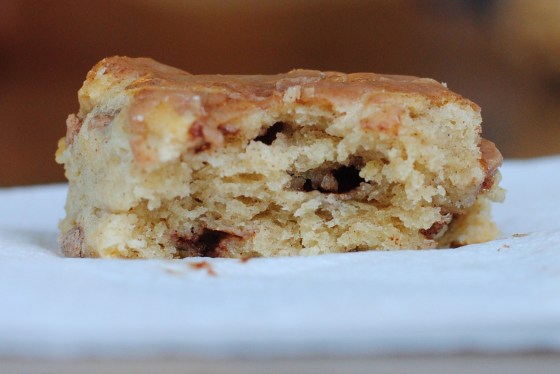 So I made these scones the other day and I just kept eating them.  Thankfully they were finally gone, before I had gained 5 pounds.  It also helped that the kids thought they were pretty great too.  I think having 3 boys is really going to come in handy….they can help me eat all these baked goods and then they will run out and play soccer or basketball and burn it all off.  Perfect.  I have it all worked out.

Scones are actually really easy to  make and don’t take much work and time.  I had these scones thrown together in maybe 10 minutes.  You can also cut out your scone pieces and freeze them and bake later.  Then you have fresh, warm scones anytime you need them.  The dough doesn’t need to thaw before baking.  I made all of mine up at once, but if you pop one in the microwave for about 10 seconds the next day, it brings all the loveliness back again.  SO YUM.  These scones tasted pretty good even cold the two days after I made them.

The original recipe says to sprinkle scones with cinnamon and sugar, but I decided a cinnamon glaze would be heavenly. And it was.

Preheat oven to 425 degrees. Line a large baking sheet with parchment paper or a Silpat and set aside.

In a large bowl, whisk together flour, baking powder, sugar, cinnamon, and salt. Quickly cut in the butter, using your hands, two knives, or a pastry blender. Mix until mixture resembles coarse meal, with a few larger butter lumps. Stir in the cinnamon chips. Pour heavy cream over the ingredients and stir until dough begins to form. Don’t over mix.  It will still be a little crumbly.

Transfer dough to a floured countertop and knead dough by hand just until it forms a ball. Basically pat and push it until it comes together.  Pat the dough into a square or rectangle shape, about an inch and a half thick.  Cut the scones into squares or desired shape.

Place scones on prepared baking sheet.  Bake scones for 12-15 minutes, or until scones are light brown. Watch them carefully and don’t over bake.

When scones are cool, drizzle with cinnamon glaze.  Scones can be glazed all at once and then stored in an air-tight container.

To prepare glaze:  mix sugar and cinnamon together in a bowl.  Slowly add a very TINY bit of milk and then mix.  Add milk until the desired consistency is reached.

Adapted from Two Peas and Their Pod